Entanglement Technologies has been in the field across the United States, using its cutting-edge sensing technology to provide trusted information to those who need it most, whether emergency responders or industry workers.

Our technology provides the data needed for groups to make informed decisions across a variety of communities and industries.

Hurricane Harvey brought as much as 60 inches of rain on Houston and neighboring areas, leading to widespread flooding, facility damage, and massive releases of chemicals into the environment. Companies reported (likely an underestimate) that 8.3 million pounds of pollutants were released during the hurricane; this occurred during a period when the state temporarily suspended mandatory reporting requirements. In the immediate aftermath of this disaster, Entanglement Technologies was deployed to Houston, Port Arthur, and other nearby communities to provide rapid screening and source identification. We also coordinated with the Houston Health Department to direct their resources and responses toward protecting communities potentially at risk. Working with Air Alliance Houston and the Environmental Defense Fund (EDF), our team used a vehicle-mounted AROMA instrument to monitor storm-damaged areas.

AROMA-VOC was able to rapidly screen large areas and identified seven significant chemical plumes in the vicinity of the Houston Ship Channel and Port Arthur. These plumes consisted of a range of hazardous chemicals, including toluene, ethylbenzene, xylenes, and most significantly benzene. Two of these plumes exhibited benzene concentrations above 50 parts per billion, triggering follow-up analyses. 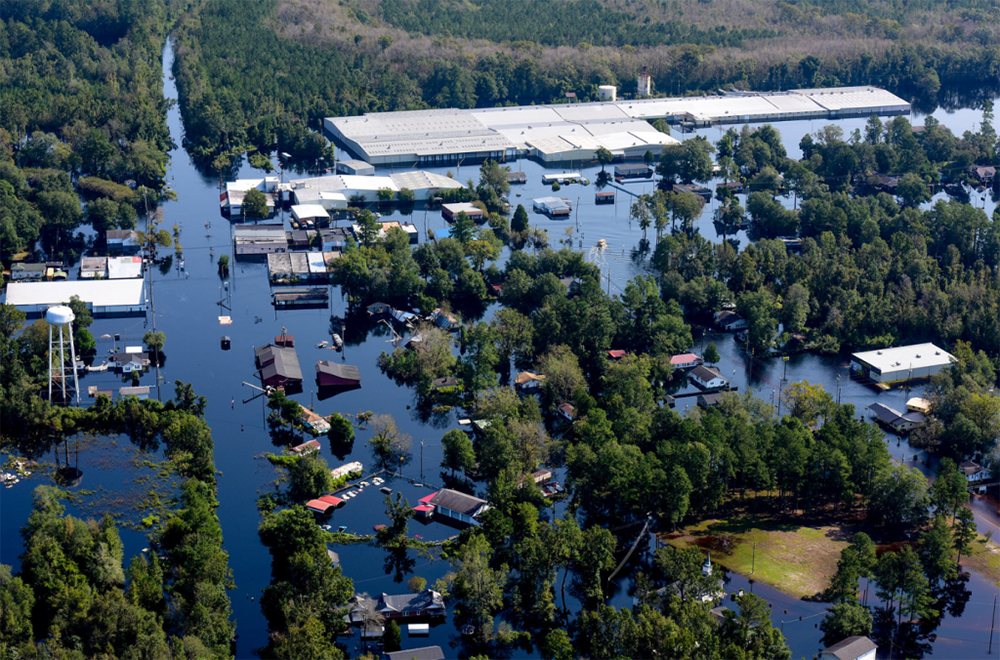 The AROMA technology simultaneously analyzes for multiple chemicals, providing a critical capability in the source-dense environment post-Harvey. Multiple plumes were spatially overlapped at a site in Baytown and were only distinguished by the dramatic variation of chemical composition across the plume. Of the seven plumes characterized, only two plumes displayed similar “fingerprints”, indicating that they were produced by similar source materials. During the course of the deployment (lasting 5 days), we completed measurements across Houston, Harris County, and Port Arthur. These data provided critical information on the chemical releases that neighborhoods were exposed to in the immediate aftermath of the hurricane and supported  decision-making surrounding public health interventions. The capabilities demonstrated during this deployment have led the Houston Health Department to procure multiple AROMA instruments to provide ongoing response and monitoring capabilities. 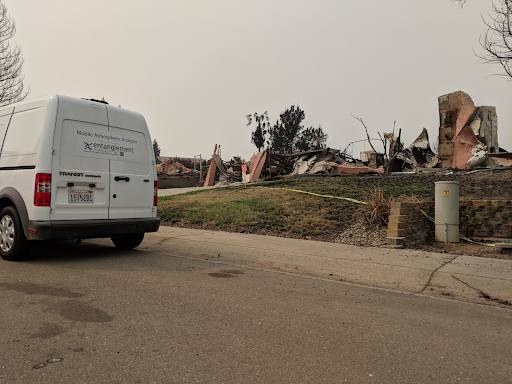 The summer and fall of 2018 saw multiple devastating wildfires in California, including the Camp Fire, which was the deadliest wildfire in the United States since 1918. Entanglement Technologies was honored to help cities during the recovery of these disasters by testing for benzene contamination of municipal drinking water supplies. We provided data collection and analysis for the most devastated areas of Redding (in particular the areas hit by the “fire tornado”) and are part of the selected proposal to help the City of Paradise rebuild after the disaster.

For these deployments, an AROMA instrument was fitted with a direct sparge front end, allowing the outstanding analytical capabilities to apply directly to water-borne contaminants. The robustness and sensitivity of the AROMA analytical method enables results with no degradation in performance under these saturated water vapor conditions. With method detection limits below 100 ng/L for many high risk contaminants, AROMA’s 10 minute, full-spectrum analysis time provides rapid screening results over large areas. This flexibility allows the same AROMA instrument to provide multimedia analysis with the same excellent sensitivity, accuracy, precision, and selectivity as during atmospheric analysis. 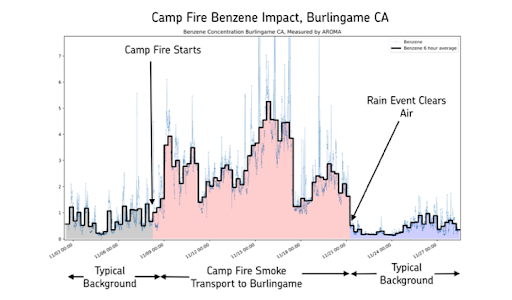 In addition, an AROMA instrument detected the significant chemical pollution generated by the Camp Fire and blown 155 miles to our facility in the San Francisco Bay Area. This analyzer was operating in base station mode (operating 24/7, unattended, and producing 120 measurements per day). During this event, concentrations spiked to the highest levels observed at our facility and remained an order of magnitude higher than typical concentrations for nearly 10 days, until changing weather and wind patterns transported the smoke and pollution plume away from the Bay Area. 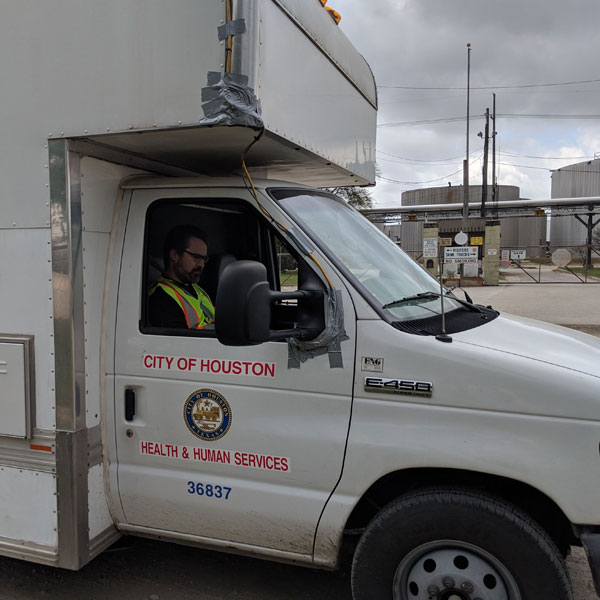 Industrial accidents, such as major leaks and fires, require rapid-response analytical tools in order to protect first responders, mitigate fire and explosion risks, ensure community safety, and collect data that will enable forensic evaluation of the causes and magnitude of chemical releases due to the accident. AROMA-VOC can quickly and accurately identify sites with elevated chemical concentrations across a wide area, while providing laboratory grade, multi-chemical analysis of each identified plume to quantify toxicological risk, even while traveling at highway speeds. AROMA has repeatedly proven extremely valuable in rapid-response situations.

In 2017, an AROMA instrument was deployed in response to an unplanned shutdown of the Benicia Valero refinery in California, which was caused by a complete loss of electrical power to the facility. This shutdown led to large-scale flaring that caused black smoke to blanket nearby areas. An immediate shelter in place was issued for nearby schools and similar facilities. Coordinating with the Bay Area Air Quality Management District, we deployed an AROMA instrument to collect air quality data first at schools and then downwind of the facility, to assist in determining if additional interventions would be required. The AROMA data showed no indication of dangerous concentrations of benzene in the air surrounding the school or in the downwind areas.

In March 2019, a facility operated by Intercontinental Terminals Co. (ITC) suffered a leak and large fire that blanketed the greater Houston area in smoke. Working with the Houston Health Department, EDF, and the Galveston Bay Foundation, we shipped an AROMA instrument by Fedex from our headquarters in Burlingame to Houston, where it was temporarily installed in Houston’s Mobile Ambient Air Monitoring Laboratory to collect data on the same day.

The AROMA instrument detected extremely high concentrations of benzene downwind of the ITC fire site. Data from the analyzer was fed in real time to the incident command post and the City of Houston to provide up-to-the minute information of the most dangerous of the pollution concentrations collected. We tracked the chemical plume until we reached the city boundary 12 miles downwind of the ITC facility where we were unable to travel any further. The AROMA instrument also analyzed water samples collected from the Houston Ship Channel to evaluate the impact of the chemical release on that body of water. 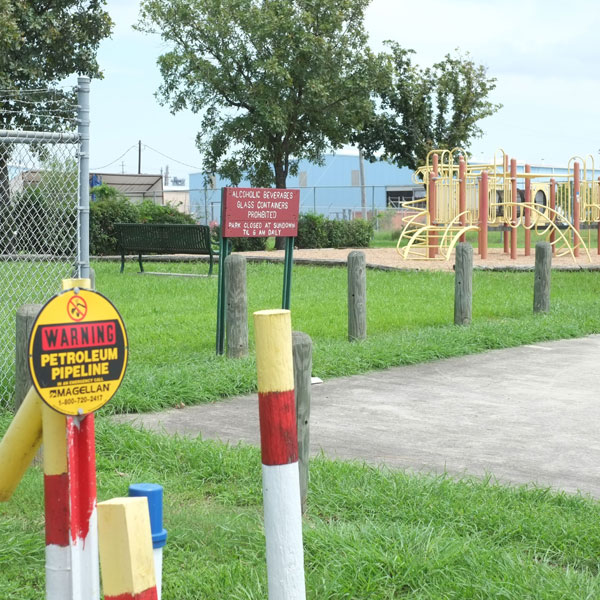 Entanglement’s AROMA technology is a powerful tool in contaminated site characterization where rapid results and high sensitivity can accelerate and reduce the cost of field campaigns, detect and monitor pollutants that can leak into the ground and groundwater, and infiltrate indoor air spaces. One chemical pollutant that can occur across these different environments is trichloroethylene (TCE), which has been linked to several adverse health effects and can cause birth defects in the first six weeks of pregnancy. TCE is used in many industrial processes, but when not properly disposed of, it can enter surface water and pass through the soil to contaminate underground water sources.

When the Entanglement team monitored six sewer sources near contaminated sites in the San Francisco Bay area, we found significantly elevated levels of TCE in five of these sites. Our AROMA instruments are capable of long-term monitoring of contaminated sites and detect chemical pollutants whether they occur in the air, water or soil, making them valuable tools for industrial workers, environmental consultants and public health officials.